So, like Tea Rat and Rattus with their opera glasses, you might want to click on all images to see the details of a night at the theatre.... 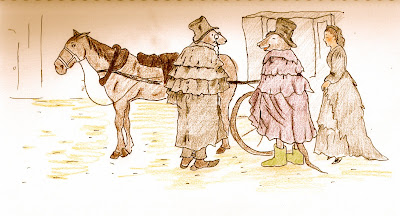 "I say old man, where are your trousers? And that purple velvet cape, what were you thinking?" nervously chirped Rattus, as he contemplated the fact that this was Nowhere's first cultural event of the year and first impressions are of the utmost importance. "Old thing, tonight is a night to bring out one's best. LOOK! THERE'S THE PLAYBILL; let's dash over to be the first to see it. OH BOTHER! Where are my opera glasses...the print is quite small," said Tea Rat as he discretely inched his way closer to the playbill. With a tone of admiration and a quiver in his voice he read each word as if savoring every last morsel of a fine cheese: 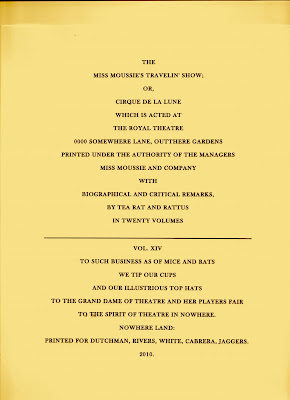 As they entered the gilded foyer, it was evident that Tea and Rattus were not the first patrons there; the interior of The Royal Theatre of Nowhere was buzzing with distinguished guests such as Miss Paisely, Mimi from Paris, Sherry from Phoenix, the lovely Tita, Racoon's trainer, and Martina, as well as Auntie Jackie from Fairyland and Penny. Quietly taking their seats at the balcony, the lights gently dimmed to announce the rise of the curtain...the music swelled as Tea suddenly hurled himself to the rim of the balcony, snatching Rattus's pince-nez, and forgetting all dignity. 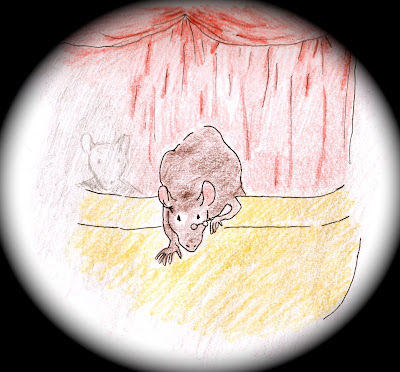 "MIND YOURSELF OLD MAN" hissed Rattus as discretely as possible. But it was too late for there was the Tea Rat, hanging over the balcony wailing, "THERE SHE IS...ISN'T SHE A PEACH? I HAVE WORSHIPED HER FOR YEARS..." 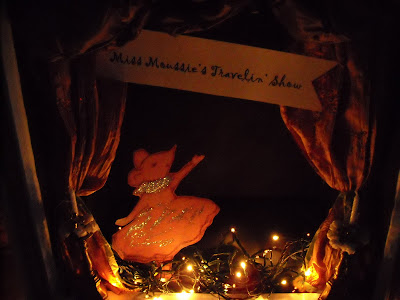 As Miss Moussie gave the signal with her hand, the curtain rose even higher to reveal an enormous gilded moon slowly lowering itself that said: 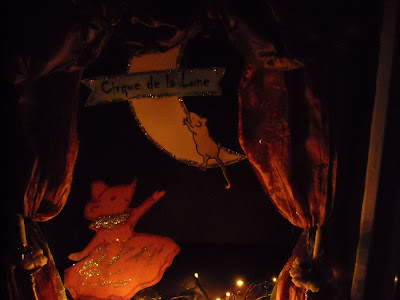 The musical number quickly changed to LE CAN-CAN as everyone held their breath; then suddenly, a loud roar erupted as none other than the lovely cabaret star JOLI came kickin'in! The house came DOWN! 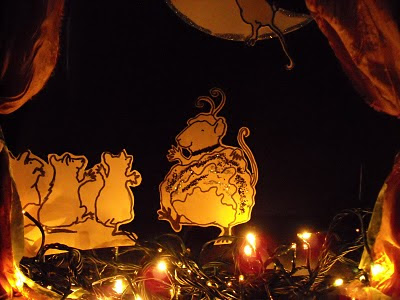 The front row of young mice could not contain themselves, but WAIT! If you think they got an eyeful with her entrance, think again! These boys are gonna have something to write home about after seeing Joli's spectacular ending! 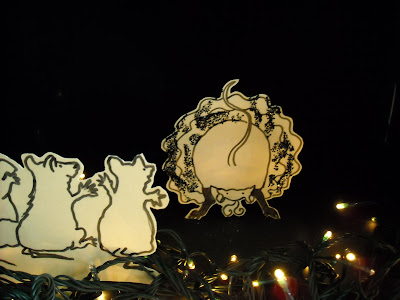 The dynamic juggling and clown duo of BEBE 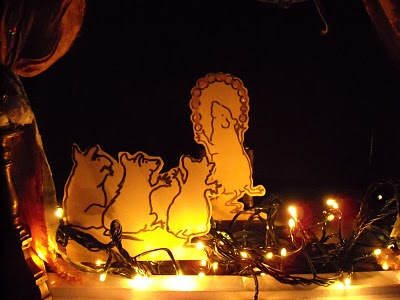 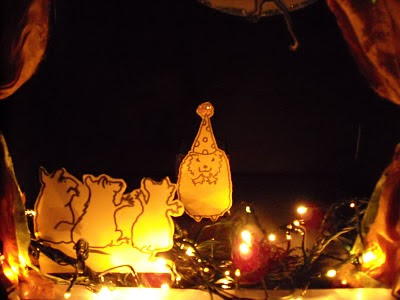 kept the jovial rhythm spinning, when suddenly who else comes rollin'in? 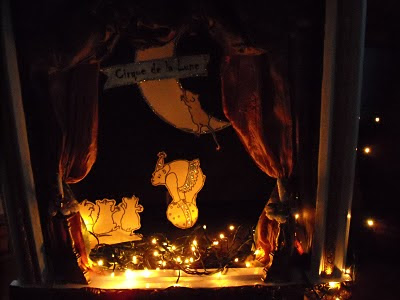 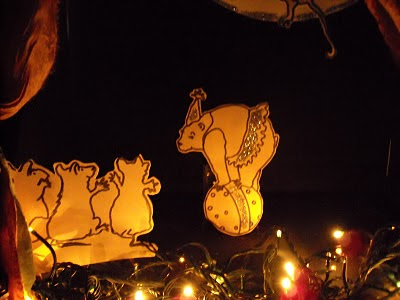 The agility and grace doesn't stop here folks....JASPER THE KING OF THE DANCING POODLES has demonstrated extraordinary talents! 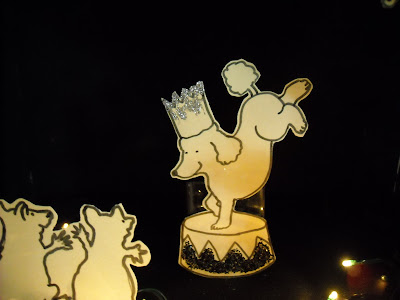 And Gretta is back with RACCOON THE MAGNIFICENT AND HIS FLYING TRAPEZE to, OOPS.....HOLD ON TO RAC'S PAWS, GRETTA! Isn't she a pro? 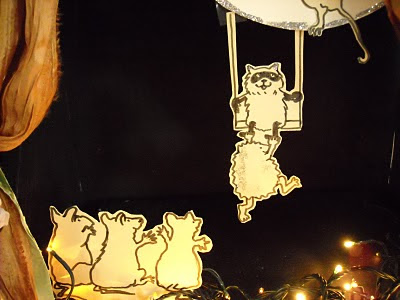 And now, for the grand fina-l.........uh, we seem to have a....WAIT! There appears to be a patron from the balcony who is now running down the main aisle, and...is now on stage and is bellowing, "WELCOME DISTINGUISHED GUESTS....I WOULD LIKE TO TAKE THIS TIME TO INTRODUCE MYSELF...MY COLLEAGUE AND I ARE TONIGHT'S CRITICS... 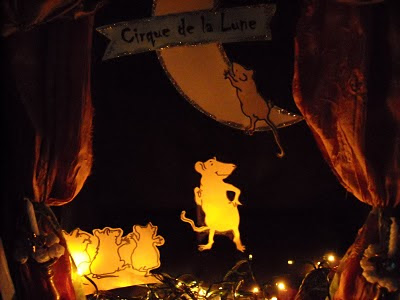 "Yes Sir, thank you very much but,..." said Bebe, dressed for her final number, as she gently nudged Tea Rat towards stage right... 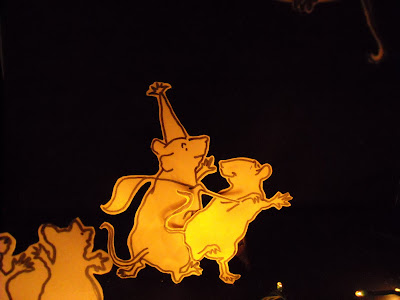 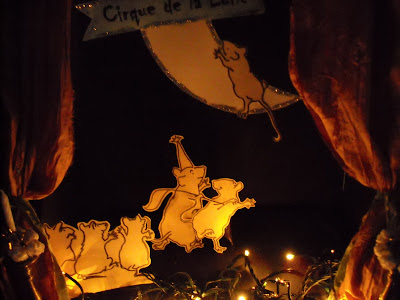 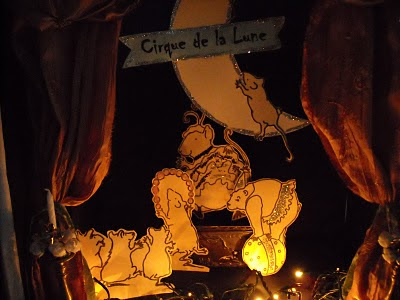 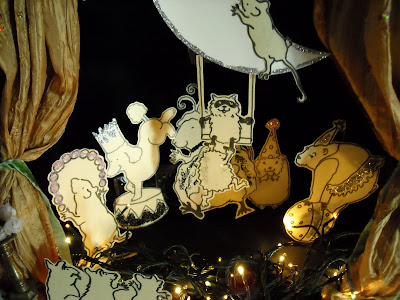 and bring a close to a most memorable evening in Nowhere. Tea and Rattus decided to walk home under the silver sliver of the Nowhere moon. "That was a smashing show tonight, wouldn't you say old thing? We have much to write about for our critique tonight, don't we sir?" said Tea. 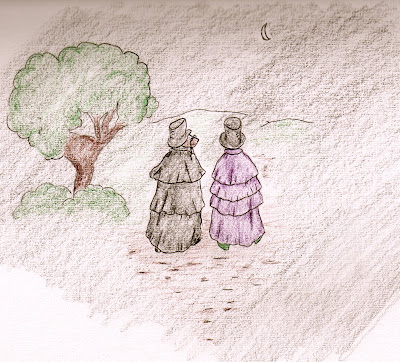 All text and pencil drawings by
Castles Crowns and Cottages ©

I agree with Pat.. Enchanting dear friend! Magnificent artwork and creativity at it’s best..
It brought a smile to my face and warmth to my heart… and oh my goodness.. Joli’s spectacular ending, GREAT! You have brought all the dear characters from Nowhere to life with this show… Thank you for including little Jasper..
I can’t say enough Anita, so I will just say thank you for your talent and creative mind! Penny

That naughty little Joli, I would have NEVER... I knew she was meant to come to me darnit, and I was outbid for her by $1.00. Oh I was so sad. I so want a little moussie of my very own too.

I loved all of the characters that were brought back. What a production you have done tonight. I loved the show. I will be buying my tickets in advance for the next one. I just cannot miss a one.

What a fun night at the theatre. Thank you my sweet friend. Thank you. So beautiful.

Have a GREAT week this week. We are all back to work tomorrow. I love you sweetie. Country hugs and much love...Sherry

I now sat down with my huge cup of coffee to really appreciate the lovely show. I still feel enchanted and nearly crept into each picture to see and feel every detail you lovingly put there. I am no way grown-up-feeling now- I feel like a child in wonderland (again). Thank you ! The Champagne will have to wait til later today - but at least I was dressed appropriately...kind regards, Martina

You have a hit here. These with the coats are something I would raise my little ones on. They are simply beautiful and the colors. I can see them in a small Beatrix Potter style cover with a vintage appeal. Gorgeous potential. Blessings friend.

I just lost my comment I think. I said something like this. These with the coats and the kindness and colors are something I would raise my kids reading to them. I see them in small Beatrix Potter style vintage like books with a series. I love them sooo. Blessings dear friend and keep it up.

"Miss Moussie's Cirque de la Lune a Smash Hit, with One Moment of Lunacy."
By Rattus Scribus, Critic at Large.

It would be broaching redundancy here to repeat yet more accolades for what is by now universally acclaimed to be a smashing success for Miss Moussie's Cirque de la Lune or Travelin' Show.

Miss Moussie's show electrifies, surprises, conjures childhood happinesses, sings with love long lost and regained, inspires the dream in all of us that anything is possible, and so what are we waiting for?

The juggling and trapeeze acts were a homage to the heights of creature coordination and agility.

I give extra marks to Mozes the bear for his courageous role which required he lay his manhood in the dirt, and wear a tutu. I understand, he bristled at first, saying, "This part is just not me." And Miss Moussie shot back: "You're an actor. Act like it IS you." The show went on, and that's what matters.

Let us be clear, however, that Joli's Can Can is not suitable for young children. But let us be equally clear that I couldn't care less, and that children had no business here tonight.

The Cirque de Lune had but one moment of Luncacy.

The grand show was slightly disrupted when my dear colleague and friend Tea Rat (who has long been utterly smitten by the beauty and poise of Miss Moussie) abandoned all decorum and vaulted upon the stage, babbling something which from my venue was virtually incoherent to me. He was properly forthwith ejected stage right.

I shall chalk up my companion's behavior to the unbridled exuberance of fandom, and turn the matter a positive one for the show.

For Miss Moussie has no fan anywhere in Nowhere, no devoted disciple, no conquered heart, greater than my Eros ensorceled friend, Tea Rat.

So, do I give "The Travelin' Show" paws up or paws down?

Three Cheers, a hoot, and a rrrrr.

A distinguised critique dear sir! Let us go again tonight for I need to observe the fine details of each actor; I was so enthralled with the glamour and the lights and the radiance of Miss Moussie that I lost my head.......ON TO THE THEATRE AGAIN so that I may write down my final critique!

Superb in every way, your talent never ceases to amaze me! A writer, an artist extraordinaire- ad a sweetheart on top of it all. What qualities you have my dear! have a lovely week....xOxO

This was truly the EVENT of the year! BRAVO!! I cannot wait to read the reviews.....

Dear Everybody...
I'm never speechless so let me say this...This, was the most enchanting performance EVER...in all my little moussie history..
I want to thank the audience for being there..clapping and cheering..I want to thank Rac,and Gretta for their bravery...thank YOU dear Mozes for being a good sport..you look grand in Pink..A million thanks to Bebe for celling tickets..and for a wonderful juggling act..
Thank you Joli..I must say you are a Diva..and I liked your knickers...please tell me ..did you buy them in Paris..
And YOU sweet Jasper..you are adorable
I want to thank everybody for their support and creativity...but most of all I want to thank a Lady who made this event possible...the One and Only Nita from Nowhere...Dearest, words are not enough to express my gratitude...You are an Angel..BRAVO..and please Encore...I am at you service..

Your for ever Friend Miss Moussie

P.S and to dear Tea I say this...This, was such a nice way to get to know you better...But I was very nervous when I saw you hanging there..from the balcony..please be careful my friend..
LOVED your purple velvet coat..

P.S again... To Rattus, critic at large..I would like to say this...This old chap...this wonderful critique..was to much..These words, and I quote: Miss Moussie's show electrifies, surprises, conjures childhood happinesses, sings with love long lost and regained, inspires the dream in all of us that anything is possible..are so sweet...I will cherish them forever..You are a great writer dear Rattus!!

Dearest Miss M., The Dutchess, and all the players in this grand production, I thank you from a speechless but grateful heart for your accolades and most of all, for all of your great imaginations and courage to be WHO YOU ARE....I love you all!

Now, we need to hear Tea's critique....hold on to your seats everyone!

Smashing, just smashing said Auntie Jacqueline. I sat on the edge of my seat all night. Uncle Len came along too and even he thought all the actors and the lights and the action was simply splendid. Hollywood here we come with our traveling show!
You two rats are just amazing and I'm so proud to be a friend to both of you. Thanks for making Gretta look like a Queen Hedgehog. Her life will never ever be the same! Sweet dreams tonight.

Dear Anita,
What a wonderful performance!!! it's a rear sight here;close to the polar circle and in the middle of the woods!!! I loved it!! Knowing your ballet background I picture you as Miss M..LOL
You are so clever and playful! How do you find time to all of the thing you are doing?
I must wach it one more time.....
Hugs
Synnøve :)

This presentation is just adorable and so creative. You have done a marvelous job with the writing, the illustration and generally making us feel as if we are center stage in this whimsical production.

Thanks for the smiles this morning. :) Hope your day is creative and bright.

You're so cute. You have got to be one of the sweetest gals I've met in blogland. You bet it will be my pleasure to pop on over and see what you are up to.

Thank you so much for your kind comments. :)

I'm amazed! You have a gift here!! Awesome performance! And funny, too! Love the music! And again thanks for your sweet comment and I'm glad I have met you, too! You are indeed an interesting person! Happy Saturday!