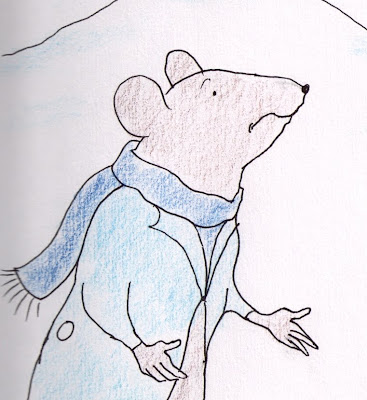 Rattus: I say old bean, isn't it time we landed this blimp, if for no other reason that there are no toilet facilities here? The tea is starting to -- let's just say -- demand things from my bodily processes.

Tea Rat: Quite right. And I've 6 cups of PG Tips in my belly.

Rattus: I've had 9, and they've long passed beyond the belly to the nether regions.

Tea: Righto! Where's that lever to lower this balloon?

Rattus: What do I know of blimps? Just find it quickly! My back teeth are floating.

Rattus: All I can think about is water. The seven seas, rain, babbling brooks, the sweat from my forehead.

Rattus: For the love of....In the name of Tartarus! Here, let me give it a pull. 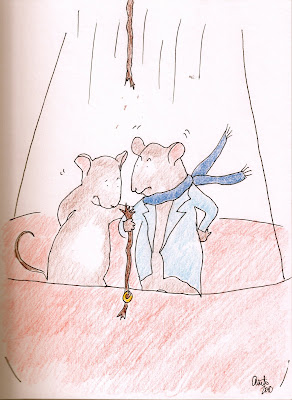 Rattus: Tea, my dear friend, I fear we have come to our last in a long line of noble adventures. We're going down with the ship... er...blimp.

Tea: Rattus, old rat, you haven't given up already have you?

Tea: Steady old fellow, we've been in fouler weather than this.

Tea: Maybe we can dump things overboard to lighten this blimp and create a softer landing.

Tea: Here now. What about that broken lever, can it be fixed?

Tea: Try stuffing the opening with something so the hot air doesn't escape so quickly. The ground's coming up fast.

Tea: I haven't the foggiest idea what you just said, but it can't be good.

Tea: Rattus, old chap, I think your great learning has finally unhinged you.

Tea: OK, how can a rat who knows a million languages not know a way to get us out of this mess?

Tea: Hello! Earth to Rattus! Are we in our happy place? OK,OK! RATTUS, it's over. I fixed it. We're saved!

Rattus: We're dead rats. If this is the end, I fear it is time I confessed something to you.

Oh My Gosh Anita Sweetie...
Don't you dare. Get that pencil back out and start drawing again. I have to see, I am visual person. Sketch, sketch my dear. I can't wait to see.

I felt that lever snap by seeing that picture of the two of them. Reuben really hit the nail on the head with this conversation. I adore it.

Picture pleassssseeeeee. I will be waiting. Thank you for sharing my sweet friend. Country hugs and so much love sweetie...Sherry

Oh dear, not to worry always remember to keep calm and carry on. Paisley has already rung up the fire department and they are on their way with a huge net to catch the our daring duo.

Love from Bonnie and Paisley

O I am in tears now...so funny...KAPUT..HAAAHAAAA..and I didn't know you spoke chinees...The drawings are grand..the one with the rope is hilarious..Stay calm now..Mozes is on his way with a trampoline...:)))
Thank you for making my day..!!!

[I leave my beloved wife Anita to draw her hysterical pictures to accompany what follows below.]
...........

Rattus: Tea, my dear, dear friend, I have something I must confess to you. I...

Tea: Not now old thing: survival, first order of the day, you know.

Rattus: Abandon ship! Every rat for himself!

Tea: ABANDON TO WHERE?! Grab everything and pitch it overboard. It will lighten our landing.

Rattus: You're right, you're right. (There go all our suit cases -- my favorite pajamas were in there.) Sorry, son, I lost my head. (And the picnic blankets. Gone.) I would never abandon my friends. (Sigh! All our books!) Surely you know that. (Ahhh! All our food!) Above all one's best frien... (Wait a minute! Not the flasks of wine and ale. Over my dead body!)

Tea: That will be true enough in about forty seconds. The ale or our lives? Are we really discussing this? May I?

Tea: NEVER! NOT WHILE THERE'S BREATH IN THIS RAT'S BODY! FREEZE! DON'T YOU DARE!

Rattus: Oh...I suppose we should not deny ourselves one last comfort...before the (choke) end.

Tea: I'll never forget you for this, Rattus. I mean saving the tea and all.

Rattus: I fear we will shortly be forgetting all.

Tea: We've drifted so far. Where do you suppose we are?

Rattus: We've traveled well beyond Nowhere, that's for sure. We could have gone to way Over There, or, Heaven forbid, Out There. What do you think?

Rattus: No, by thunder! I think ... Heaven help us ... I think we're about to crash completely outside of our beloved land of Nowhere and into Left Field.

Rattus: Brace yourself, old thing! At least there's some trees. Maybe that will soften our....

MEANWHILE back in Nowhere, Rattus and Tea's friends have been watching the dramatic tableau unfold from the ground below.

Mozes: Well, mates, they're gone. They were good rats. Good mates. Funny as all He...

Gretta: No, no, no. They could still be alive. Oh, where do you think they went?

Raccoon: Careful Gretta, you know when you get excited, your spines can shoot out.

Mozes: You're right, Gretta. They're survivors, those two. Perhaps they ... That is, I mean I think they landed way out in Left Field.

Ms. Moussie: Then we simply have to go search for them.

Bebe: Me and TJ will get to the plane and search from the air.

Mozes: It's settled then. Let's go get our boys back.

Tea: I feel like I've been hit by a train.

Rattus: Our lovely blimp... everything is in ruins. Hah! But I see that even the cold bony hands of the Grim Reaper were insufficient to pry your tea-filled knapsack from your paws. I do believe that had you died, you would have taken it with you to the next life.

Tea: You'll be glad for my knapsack later. But for now: first order of business, you know. By the way, what were you going to confess to me?

Tea: Hummm! I see. Well I'll accept that, for now. So where are we?

Rattus: I fear we are totally in Left Field. Where in the name of Tartarus do we begin?

Oh what did I miss! YIKES!!!! Oh my word... WHAT A landing that was!!! poor Tea and Rattus.
Anita... the drawing with the rope left me in stitches....... Everyone will rally together, I am sure we will find Tea & Rattus. I will radio Bebe and find out what she sees from above...

Bebe to ground... Bebe to ground!!!
Can anyone here me? I think I have spotted them.. I believe they have made a big SPLAT near the PUB at Rabbit Hill!!! I am going in...

T.J. MERRIWEATHER TO BEBE...CONFIRMED....TWO RATS WERE SEEN ENTERING THE PUB AT RABBIT HILL....STOP....BOTH WERE HOBBLING BUT IN GOOD SPIRITS...STOP....THE LED ZEPPLIN WENT UP IN SMITHERINES...STOP...T.J.TO THE VOLUNTEER FIRE DEPT. HEADED BY MOZES...GET THE ENGINES READY!

MOZES ON THE SCENE WITH HIS BAND OF FIREFIGHTERS...STOP...GUSTAVE, MISS MOUSSIE, MR. C. AND EVEN ELVIRA WITH WHAT APPEAR TO BE BUCKETS OF WATER..STOP...OVER AND OUT!

Rattus: Hello, lads! Me and my good companion here have stared down the face of death, and survived to tell you all the tale. Drinks all around! Ale for everyone!

Rattus: Lads, once you've looked into the eyeless sockets of the Grim Reaper, the simplest ale is richer far than anything that came before. Cigar smoke is mountain air. And the company of good friends is the fellowship of the heavenly saints. To you, lads!

Rattus: Here's to you my good friend. Cheers.

Miss Jane Moussie Bond to the scene..
Have no fear..Miss Moussie is here..with a bucket of beer ..Here's to the Fellowship of Nowhere..three hoots and a cheer..;)))

Bring on all from Hilltop Hall to celebrate the brave landing of the dynamic duo and the two incredible ladies and their flying machines! THANKS TO PAISELY BUNNY for alerting Mozes. This calls for a celebration at the NOWHERE THEATRE! Miss Moussie's Travelin' show is gearing up to present IN HONOR OF TEA AND RATTUS, a theatrical event of the season!!

Yes indeed... We all need to celebrate! Come one, come all... Bebe will be there with bells on...

Gretta never let any spines fly....she fell over and fainted from all the intense drama...Somebody get her the smelly saltz...A skunk should do the trick! Anyone know where to find one?

Oh my poor Gretta! SOMEONE HELLLLLLLLLP !!! Gretta has gone down and I am too little to pick her up....
Bebe

Anita...you let your imagination soar!!! you are 2 cute!

Oh thank you dear Paisley! I will stay with Gretta till you arrive..
Bebe